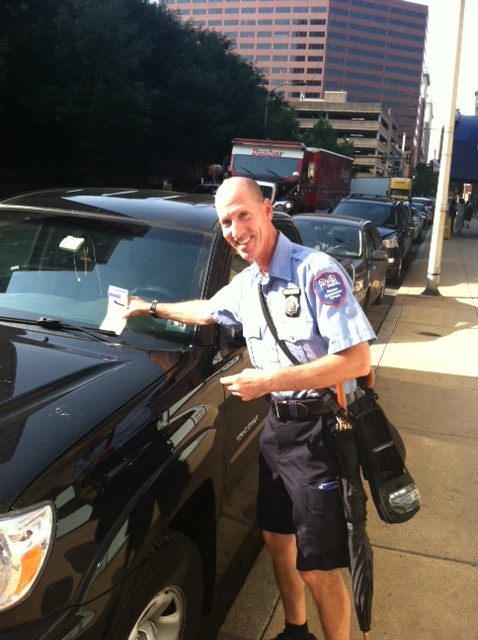 Rutizer spends his workday out on Philly’s streets contributing a lot more to our city than just parking tickets on windshields. From helping citizens understand parking signs to showing tourists the way to their next destination, Rutizer puts a positive face on the infamous Philadelphian passion.

Rutizer is a tall man with a thin frame and neatly cropped hair. His most notable feature though, is the smile he wears 24/7, rain or shine. His voice is soft and low, but the passion he has for his city and his job exudes in everything he says. It’s even landed him Employee of the Month on multiple occasions.

Before he found the PPA, he volunteered in his community, helped senior citizens and also worked as a valet. While he enjoyed his time valeting, it didn’t allow him the face-to-face experience with people that he craved.

“I just love dealing with people,” Rutizer stresses, “I love that [human] interaction!”

In fact, he loves being around people so much that he rarely takes a day off and constantly picks up extra shifts. He’s simply happiest when patrolling.

Both of these places are tourist destinations, making Rutizer’s role as a representative of our city all the more important. In fact, he finds that many of the questions people have in these two areas don’t even pertain to parking. Most of the time, he serves as an unofficial tour guide, giving directions and pointing out destinations.

Rutizer also loves helping people understand the signs. Not fully reading the signs is the most common parking violation he sees, and even though confused drivers can tweet or Facebook message the PPA with a question, Rutizer is on-the-ground and ready to help.

“When they made up these signs, it was hard to fit every little detail where people can see [it],” Rutizer laments, adding, “I had a woman this morning who only saw the middle of the sign where it said ‘1 hour parking,’ but she didn’t see the top where it said ‘truck loading only.’”

After hearing him speak so positively about his experiences, you’d never guess that working as a PEO didn’t always come easily to Rutizer. A sensitive person, he found that being a PEO took a bit of adjustment.

However he does admit, “People are gonna scream at you, but I just take it with a grain of salt.” Usually apologizing and explaining that it’s part of his duty goes a long way to appease angry people.

At first he took to heart all the backlash and criticism from those he ticketed. He quickly found that it’s all in your mindset and attitude. Treating everyone with respect and keeping a positive, upbeat outlook no matter the situation really makes all the difference.

He explains that a positive patrolling experience begins with first impressions.

“People see that first impression of a PEO…You want to be nice to people so they respect you out there,” adding, “It’s helped me out every day that I’ve worked this job.”

Rutizer operates under a “get what you give” mentality when on duty, saying, “There’s always going to be someone who doesn’t like you because you’re issuing them a ticket…but you just have to do your best and go that extra effort.”

He truly believes that at the end of the day, “If you don’t love this job, you’re not going to be able to go out there and interact nicely with people.” For him, the eight-hour workday goes by in no time at all.