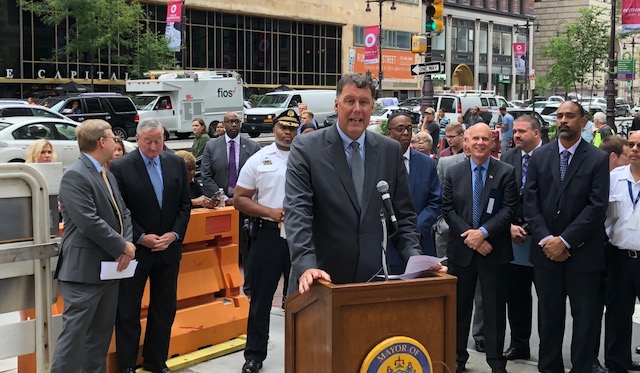 PHILADELPHIA – City officials joined with partners at SEPTA and the Philadelphia Parking Authority (PPA) today to announce a new effort to address Center City congestion. This will kick off starting September 24, with an initial focus on illegal movements along Market and Chestnut Streets that impact Philadelphians riding buses, walking, bicycling and driving.

In recent years, Center City’s growth has contributed to an increase in the number of pedestrians, transit riders, bikers and drivers of all types that share its narrow street grid. Philadelphia has grown by more than 50,000 residents and jobs since 2010, and Center City is now the second most dense downtown in the United States – behind only midtown Manhattan. The resulting traffic congestion impacts the lives of residents throughout the city, costing them valuable time, and limits their ability to reliably access employment opportunities and amenities.

“People need to get to where they are going – to work, to school, to see their loved ones – and not worry about getting stuck in traffic. It’s that simple. That is why the City is joining forces with SEPTA and the PPA to put this project in motion. We don’t need any new legislation, we are just enforcing laws already on the books,” said Mayor Jim Kenney.

Congestion contributes to higher operating costs for SEPTA, and impacts service for customers.

“Our region is Pennsylvania’s economic engine, and it works because mass transit works,” said SEPTA General Manager Jeffrey D. Knueppel. “Unmanaged traffic compromises our ability to move people through a dense, urban area. This partnership is crucial to ensure that SEPTA can keep the economy moving.”

During this enforcement effort, the PPA will be placing a special emphasis on no stopping and standing violations within vital bus lanes along with other offenses that add to congestion and create public safety issues.

“We are proud to partner with SEPTA, and the City of Philadelphia to deter illegal parking in vital bus lanes,” said PPA Executive Director Scott Petri. “Our goal is not to issue tickets, but rather deter if not stop unsafe behavior and eliminate congestion from our streets.”

The initial focus of this initiative will enhance enforcement of the bus, bike, and right-turn only lanes on Market and Chestnut Streets in Philadelphia. Chestnut Street will be prioritized for enforcement between 22nd and 10th Streets; Market will be enforced between 7th and 13th. The only acceptable use of the lanes are right turns. All other activity including stopping/standing, loading, or traveling through the intersection is prohibited.

This a joint initiative of the City of Philadelphia, SEPTA and the Philadelphia Parking Authority.