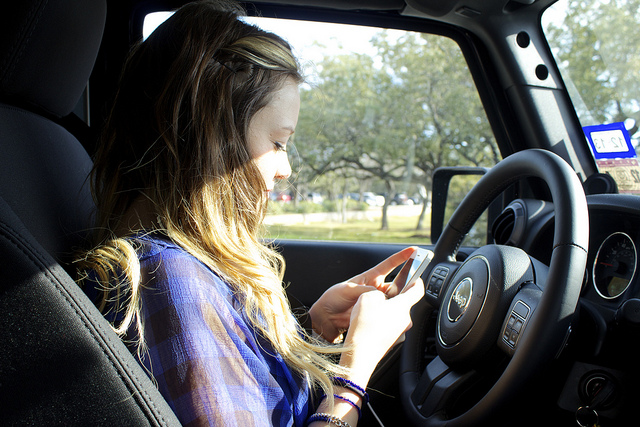 It only takes a single moment of inattention for a car accident to occur. Unfortunately, a society that is too busy has led to all too many people attempting to do other things while they’re behind the wheel. Simply reaching for something in the car can be a distraction, especially if you have to take your eyes off the wheel to do it.

Personal grooming, changing the station on the radio and other tasks all seem perfectly reasonable right up until they lead to accidents. “Cell phones”, New York traffic offense attorney Zev Goldstein tells me, “unfortunately create an even more potent distraction: texting, making phone calls and surfing the web all pull drivers’ eyes off the road and cause serious problems and have reached epidemic levels in recent years”.

Texting and Driving: The Statistics

Six billion text messages are sent in the U.S. every day. Unfortunately, all too many of those are sent while the sender is operating a motor vehicle. While almost 90 percent of adults admit that they know texting and driving is dangerous, 49 percent admit to occasionally engaging in texting while driving.

Even more will use their cell phone while driving — about 82 percent of adults between the ages of 25 and 39. Taking their eyes off of the road for even that brief period of time can be dangerous, especially with modern smart phones, which require the user to look down at the screen in order to dial. Unfortunately, the number of people surfing the web while driving is also increasing: in 2015, 29 percent of drivers admitted to using the internet while behind the wheel. As navigation apps have become more common, people have become more likely to check them while actively driving instead of pulling over.

Statistics by Age and Gender

Unfortunately, young drivers are more likely than their older peers to be distracted while behind the wheel of the car. When drivers under the age of 20 are involved in fatal crashes, 16 percent of them were reported to be distracted. Drivers under the age of 25 are also two to three times more likely to send emails and read and answer text messages.

When it comes to using phones and driving, women and men tend to view their distracted driving habits the same way. They’re equally likely to:

Women, however, are more likely to engage in distracted driving behavior like interacting with children in the back seat and taking care of personal grooming.

Drivers on their cell phones are more than 20 times more likely to be involved in accidents than drivers who aren’t distracted, and one in four car crashes involved a distracted driver on a cell phone.

That’s an incredible number of lives that could have been saved simply by people concentrating on driving while behind the wheel of a car.

In general, texting drivers take their eyes off of the road for about five seconds. Unfortunately, it’s only safe for a driver to look away for around two seconds.

Texting while driving is the new driving under the influence (DUI). Many states are cracking down on cell phone use while behind the wheel, insisting that drivers pay attention to the most critical task — driving — before turning back to their cell phones. These measures are aimed at preventing accidents and making the roads safer for everyone.

Note: Fay Niselbaum is a content specialist at The Law Office of Zev Goldstein PLLC. Fay loves cooking, blogging, and spending time with her family.