We’ve all seen our share of bad parking jobs. You know — the types that leave you scratching your head wondering what could have possibly been going through the driver’s mind before turning off the ignition. In fact, some park jobs are so mind boggling, they become Internet viral sensations. Take a look at the gems below and learn from the best, or in this case, the worst. 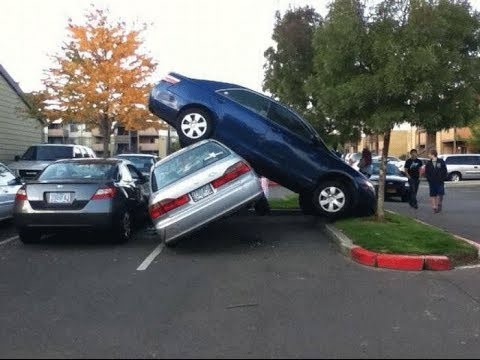 There are only two explanations for this one: Either the car merely fell out of the sky, or Ace Ventura went for a joy ride.

Either way, hopefully the owner of the silver Honda had some sort of sense of humor. Maybe their reaction was something like this, but it probably wasn’t. 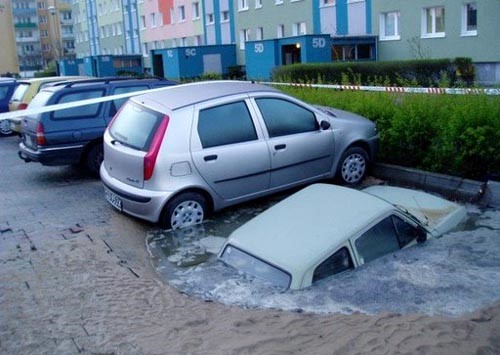 Sinkholes: they’ll getcha. Imagine walking out of the grocery store to your car only to find it swallowed by the earth. On the surface, the driver appeared to have a superb park job, so this isn’t a parking fail on the driver’s part, but definitely on the parking lot’s part. This is a particularly bad case of “wrong place wrong time.” Could you imagine the call to the insurance company? “Hi, State Farm? Soooo, my car got gobbled up by a sinkhole. I’m covered, right?” 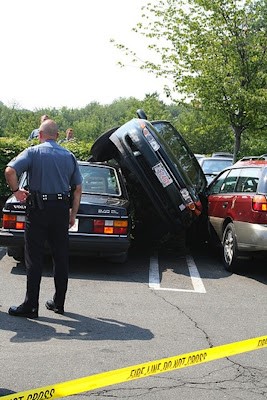 This police officer definitely went home with a story that night. Just look at how he’s trying to process the situation here.

Officer: “Whelp. I think a see the problem here. Ya see, there’s a car wedged in between two other cars.”

What was the recourse here? Even the best tow truck drivers in the world would be dumbfounded. They probably would recommend getting a crane in there, and we don’t blame them.

Do you have a funny or ridiculous parking pic? Share it with us on Twitter or Facebook! Who knows — maybe it’ll be featured on the next edition of Parking Fails!