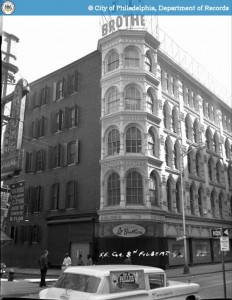 It’s been over a year since we set up shop at 701 Market Street. Nestled conveniently nearThe Gallery Mall,Chinatown andReading Terminal Market, we have the perk of working in the most energetic section of Philly. So for this month’s #TBT, we sifted through Philadelphia’s public records and stumbled upon a vintage picture of our home, and boy, have times changed.

Long before we called 701 Market Street our home, it was the flagship location of Philly’s renownedLit Brothers Department Store, which is shown in this picture. But, as competition grew and sales plummeted, Lit Brothers reluctantly closed their doors in 1977. After remaining vacant until 1989, the building was renamedMellon Independence Center.

Known for its unique Victorian architecture, it encompasses the entire seventh block of Market Street. Though it doesn’t necessarily mix in with the area’s rustic aesthetic, it’s far from an eye sore. In fact, in 1979 it was inducted into theU.S. National Register of Historic Places. That’s right — our office is considered a historic landmark!

If you’re ever near Reading Terminal Market and also have an appetite for unique architecture, stroll down to 7th and Market Street and check it out!