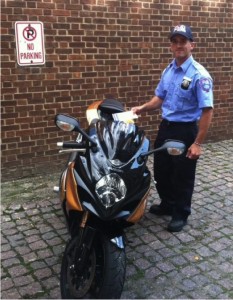 The job of a PPA Parking Enforcement Officer (PEO) requires a lot of patience and a liking for physical activity. PEOs wake up every morning knowing they’ll be insulted at least once a day for doing their job — a job that requires eight hours of walking and yes — at times issuing parking tickets. Knowing you’ll be insulted at least once during your workday requires a cool demeanor and a level-head, both of which are virtues of Antonio Menezes.

Born and raised in Northeast Philly, Menezes studied Human Resources at Temple University. After graduating, he worked as a temp in a law office. “I probably took the most water breaks out of anyone in the office. Not because I was lazy, I just needed a reason to stand up.”

Luckily for Menezes, he landed his job at the PPA not long after his stint in the law office. “I just like being outdoors and walking around. It’s almost impossible for me to sit behind a desk for hours on end.

Sitting behind a desk for hours is no longer a problem for him. Menezes now walks most of his beats in East Falls and Manayunk (the areas with all those treacherously steep hills), and he has plenty of reasons to take water breaks.

Not only does he walk eight hours a day as a PEO, he stays active outside of work. “I used to be a personal trainer before working in the law office. I work out pretty much everyday when I’m done,” explains Menezes.

With his routine in place, Menezes wakes up every morning ready to expect the unexpected. But what does he not like about his job?

“Giving tickets,” said Menezes. “Especially to people from out of state. Some people park wherever they want and don’t mind getting tickets, but some people literally have no idea how to read the signs.”

You heard it here folks — a PEO that doesn’t like to give tickets. Like any PEO, Menezes has to issue parking tickets, and sometimes he encounters people who aren’t too thrilled that they’re receiving a parking ticket. But Menezes uses the perfect antidote.

“Kill them with kindness,” he says. “Kindly explain they have the right to contest the ticket. Most people are understanding that I don’t make the rules, I just enforce them.”

Sounds easier said than done, especially for a PEO who has insults hurled at him on a daily basis. But Menezes offers a simple yet important piece of advice for all parkers.

“Read the signs,” he says in a calm demeanor. “I know some of the signs are more difficult than others to read, but if you start from the top and work your way down, you’ll be fine.”

So if you’re ever out for a stroll and bump into Menezes, don’t expect an argument. You’ll get the exact opposite and if you’re lucky, a thorough explanation of parking signs. By the way — if you’re a diehard Eagles fan, don’t be afraid to talk some birds with him.