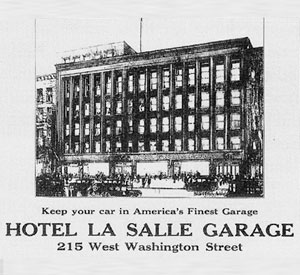 Nowadays if you’re parking in a city, you can’t turn a corner without seeing a parking garage, right?

Believe it or not, parking garages weren’t always a thing, especially during the early years of automobiles. That all changed in 1918 with the Hotel La Salle Garage in Chicago.

The idea was simple: Provide customers with a conveniently safe place to park their cars as streets became too crowded with vehicles. At the time, this concept was unheard of, but that’s exactly what the owners of  Hotel La Salle did after hiring architects Holabird and Roche.

Sadly, after 87 years of service under its belt, the Hotel La Salle Garage was demolished in 2005. Attempts were made to preserve the garage as a landmark, but they never came to fruition.

Now let’s fast forward to 2016: Try turning a city corner without seeing a parking garage; you won’t have much luck. In fact,  some parking garages will even do all the parking for you!

So the next time you’re parking in a garage, remember that it all started with the Hotel La Salle Garage.

Psst: While you’re here, take a look at the discounts offered at our garages.